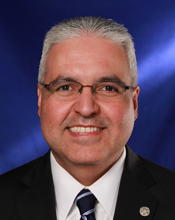 Dr. Marcelo Cavazos started his teaching career as an English teacher in the Mission Consolidated ISD in 1990. In 1992, he moved to McAllen ISD where he taught English and government. He was named the secondary language arts supervisor for Mercedes ISD in 1993 and became associate adviser for San Benito Consolidated ISD in 1995. Cavazos went to work for the Texas Education Agency Department of School Finance and Support in 1998.

He received the 2009 Arlington MLK Celebration Sharing the Dream Award for Education, the 2012 YMCA Citizen of the Year Award, the 2012 Educator Award from the Asian-American Chamber of Commerce, the 2013-2014 Elks Distinguished Citizenship Award from the Arlington Elks Lodge No. 2114, the 2016 Seat 21 Honoree by the Texas Rangers Baseball Foundation, the 2016 Texas Superintendent of the Year and was the Texas nominee for the 2017 AASA Superintendent of the Year Award. He has been married to Nora for 20 years; his children, Theresa and Diego, attend school at Arlington High School and Gunn Junior High.